The panel discussion was moderated by Dr. Sean Haley and the panelist included Dr. Ezemenari Obasi, Dr. LeChauncy Woodard, and State Representative Garnet F. Coleman. In his presentation, Dr. Obasi spoke of the historic brutal treatment of African Americans, his research on the chronic stress that can lead to chronic illness and substance use, and how cognitive dissonance doesn't allow people to see facts that go against their beliefs. He closed his presentation by stating that a systemic based approach is needed in order to create real change, along with self-assessing one's own biases and confronting them instead of becoming defensive about them. He mentions that victims have to stop being asked to be the source for change and instead create think tanks with a diverse group to initiate change. 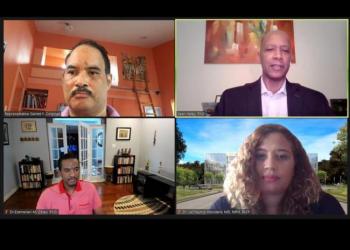