To nurture the research paths of early-stage investigators, pilot project grants are tailored to help jump-start their careers and offer new opportunities for emerging researchers.

In 2021-2022, four pilot grants have been awarded to NIH/NIHMD’s HEALTH Center for Addictions Research and Cancer Prevention (HEALTH-RCMI; PI: Dr. Ezemenari M. Obasi) researchers and early-stage investigators whose careers are distinguished at the University of Houston.

The recently awarded Pilot Project Grant, entitled “A Mobile Intervention for Cannabis-related Disparities Among Black Cannabis Users: A Pilot Study” is led by University of Houston researcher, Dr. Lorra Garey.  Garey’s project explores smartphone apps which promise to offer an alternative to face-to-face treatment for Black American Cannabis users who wish to reduce their use. The research initiative has been awarded $50,000 by NIH/NIHMD.

In an exploratory study into the feasibility of podcasting cervical cancer prevention, Dr. Chakema Carmack, Ph.D. received a $49,801 pilot grant from NIH/NIHMD.  Carmack’s research project is entitled, “Proof of Concept and Feasibility in Podcasting Cervical Cancer Prevention for African-American Women.”

Early investigator Brooke Kauffman leads the study on Latinx smokers and microaggressions.  Kauffman said that the goal of pilot project was to evaluate the emotional triggers from microaggressions and how they have affected a smoker’s tendency to light up.

“Our hope is that we can use this information from our harm reduction perspective to tailor this for future intervention research,” Kauffman said.

According to Carmack who received a pilot grant to fund her research on cervical cancer among African American women, the support for early investigators and established researchers has been invaluable. Carmack also recently received a NOSI grant to spearhead an initiative for reducing the incidence of HIV and sexually transmitted infections and diseases in African American and Hispanic communities in Houston.

“The pilot grant provides a springboard for future funding to continue my cervical cancer research agenda, which is incredibly valuable to me,” Carmack said. “We are all involved in this type of research to contribute to the betterment of society, particularly in population health and health disparities. For early investigators like me, the pilot grants allow us to experience and learn the nuances of a federally funded research project on a smaller scale, while furthering the science and making a difference.” 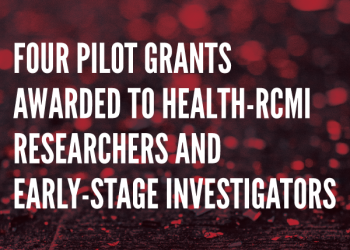