Skip to main content
"Suffering in Silence: Suicide Warnings Hidden in Plain Sight” Rates of Suicide During Pandemic Rise Among Black Americans
Within the African American community, the devastating number of high-profile suicides in 2022 has touched off a deeper conversation of how to compassionately reach out to those who are suffering in silence.

Feeling lost, isolated amid a COVID-19 pandemic which has dragged along into its third year has weighed heavily upon Americans.

Within the African American community, the devastating number of high-profile suicides in 2022 has touched off a deeper conversation of how to compassionately reach out to those who are suffering in silence.  The lives of former Miss U.S.A. Cheslie Kryst, Regina King’s son Ian Alexander, and Walking Dead actor Moses Moseley were horrifically cut short by the act of suicide.

No one is immune to that deeper lack of connection and feeling of loss even as the pandemic disruption becomes the “new normal.” Suicide remains the tenth leading cause of death in the U.S., and the national suicide rate has increased by 35 percent since 1999.  In the past decade, suicide rates have exponentially increased among racial and ethnic minorities. According to U.S. Department of Health and Human Services, suicide was the second leading cause of death among Black Americans aged 15–24 in 2019.

These heartbreaking statistics shed light on the critical importance of mental health research on Black Americans, according to University of Houston’s Professor of Psychology Dr. Rheeda Walker. Walker is one of the leading experts in the U.S. focusing on the intersection of mental health, race and suicide. Her salient, if not haunting piece of advice is to “please check on the people you love.”

“Suicide is really very complex,” Walker said. “A lot of folks look for the singular thing—that it’s because of depression or a relationship. It tends to be the analogy of a multi-car pile-up—where there’s one car that is going too fast and another driver not paying attention. It’s the environment. It’s the individual, and it’s the individual capacity to have a significant temperament to deal with stressful situations. It’s really the myriad of factors that would be hard to quantify.”

Author of the Unapologetic Guide to Black Mental Health, Walker knows the phenomenon of suicidal ideation all too well. Walker’s research delves into the deeper intersections of mental health, culture, race and suicide among African Americans. As the director of the University of Houston’s Culture, Risk and Resilience Lab, Walker speaks to the rise of suicidal ideation during the pandemic among people of color and the importance of checking in and showing love to those who are most vulnerable.

“For individuals who are chronically marginalized in our society, it’s important to be connected with people within their communities who get it—to connect with people who say, ‘I love you and I care about you, come give me a hug.’ It’s important to remind them of their worth and who they are especially in a society that can feel dehumanizing at times.” Walker said.

These messages are now more profoundly needed than ever. According to a recent CDC study, more than 44 percent of the students in the ninth through 12th grades experienced persistent feelings of sadness or hopelessness. Actual suicide death rates for Black American girls ages 13-19 increased by 182 percent, according to a 2019 study published in the Journal of Community Health.

“It can be easy for us to assume that children are living relatively carefree lives,” Walker said. “But if nothing else about seeing the death of Tamir Rice and other Black youths have told us, that really is not the case.  Black children at young ages can discern when they’re being mistreated.  Discrimination and racism are significant stressors,” Walker said. “In one of our studies, racism was related to thoughts about dying for youth.  You don’t want a 10-year-old or 12-year-old thinking about death.”

The Warning Signs and Risk Factors

Walker emphasizes that there are several warning signs before suicidal ideation, and it’s critical to reach out to people who you sense are enduring a stressful time. According to Walker, some of the marked risk factors and warning signs include some accumulation of the following:

“If we know someone has lost their job or lost their relationship or any life-changing situation has occurred, we need to be there for them,” Walker said. “Rather than saying, ‘oh they’re strong and they can handle it,’ we need to be present for them.”

Walker believes that one of the pivotal things that can help foster more hope and pride among African American children would be to affirm a positive identity that’s already firmly ingrained in the Black community and culture.

“One of those things I find out about in my work is the importance of cultural identity. It’s kind of this thing that says 1) my life matters and 2) I am part of a resilient people,” Walker said. “It’s about tapping into what once was the community saying, ‘I’m Black and I’m Proud.’ At minimum, parents, extended families, school systems and anywhere that youth are congregated can be intentional about positive messaging and contributions to society at all times of the year—not just during Black History Month.”

It’s also important to share the stories of courageous ancestors and trailblazers who can speak to the wisdom of endurance and resilience in the Black community, Walker stressed.

“When possible, connect with family members—talk to grandparents and great grandparents about how they survived segregation—what are these stories? Go to those places that have those affirming stories,” Walker said. “We have wonderful local museums, like the Houston Museum of African American Culture and Buffalo Soldiers Museum. It seems like a simple thing, but it really is affirming for those who are still questioning. We say “our lives matter.” But everything in our society says that it really doesn’t. We must be intentional about embracing our own messaging.”

Check on People You Love

Perhaps the most important message of all is to continue to check on the people you love who have suffered real loss or isolation during the pandemic, according to Walker.

“There are people who are simply more exposed due to this pandemic--especially those we know have to go into workplace and don’t get to have their zoom meetings from a comfortable place,” Walker said.  “If someone pops into my mind, I send them a text message like hey—just checking in on you. People appreciate that.”

In all transparency, it is often those who cannot see an end to pain who decide to take their own life, Walker said.

“Those who die by suicide don’t necessarily want to die,” Walker said. “They just don’t want to be in overwhelming pain anymore.  That’s something for community folks to realize—folks who might think they’re selfish or whatever. I’ve heard these narratives before, but those who died were no doubt in pain. They didn’t see solutions and didn’t have access to what they needed to get through their circumstances.”

When you hear of a friend who is facing challenges at work or micro-aggressions, spend some time just talking with them, Walker said.

“Cheslie Kryst talked about the micro-aggressions that she faced before she died,” Walker said. “Did anyone go to her and say, how did you deal with this—’hey, are you ok—or hey let’s get lunch?’ We need to do that sort of thing for people who could be struggling. We don’t have to wait for people to look miserable to reach out to them.” 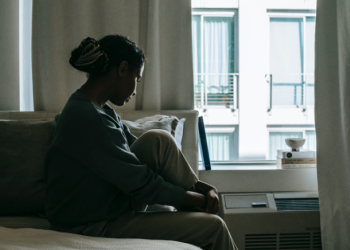