Skip to main content
Reducing Harm from Cannabis Use: New Mobile Intervention designed by UH researcher slated to help Black American Cannabis Users
Recent data suggests that 30 percent of those who use Cannabis may have some degree of Cannabis Use Disorder, according to the National Institute on Drug Abuse.

While the use of cannabis is slowly legalizing in key U.S. states, marijuana is still recognized as the most commonly used, federally illegal drug in the United States, according to the U.S. Centers of Disease Control and Prevention (CDC).

Recent data suggests that 30 percent of those who use Cannabis may have some degree of Cannabis Use Disorder, according to the National Institute on Drug Abuse.

“When people think about cannabis—partly because it has been legalized in some states—they often do not fully appreciate the potential risks associated with use,” University of Houston's RESTORE Lab researcher, Dr. Lorra Garey said. “As a byproduct, not much research has focused on developing personalized, culturally adapted interventions for cannabis use.”

Garey and the RESTORE research team are collaborating the development of a mobile app that targets cannabis use as a false safety behavior to alleviate anxiety, stress, and depression. In partnership with NIHMD and HEALTH Center for Addictions Research and Cancer Prevention (PI: Dr. Ezemenari Obasi), Garey’s research initiative was awarded $50,000 and is entitled, "A Mobile Intervention for Cannabis-related Disparities Among Black Cannabis Users.”

The app is tailored for African American adults who meet the current diagnostic criteria for Cannabis Use Disorder and are interested in either changing or quitting cannabis. The mobile intervention features several components including tips for how to reduce or change one’s cannabis use.

“When we say ‘quitting or changing,’ it’s because not everyone wants to quit cannabis. They may just want to change or reduce their use,” Garey said. “We want to approach this from a motivational perspective, and we’ll be assessing folks’ motivation to quit, including what their goals are and whether that means to reduce or quit.”

Culturally tailored and adapted videos are featured on the app, providing historical context of cannabis use among Black American adults, as well as information on false safety behaviors. The app will provide personalized intervention materials based upon where the individual is in a cannabis use change process.

“Cannabis Use Disorder is high within the Black population which places this group at a disproportionately high risk for the negative psychosocial outcomes and overall poor health effects associated with the disorder,” Garey said. “Our app will target some of the factors that are associated with increased rates of Cannabis Use Disorder with Black communities. One of the interesting characteristics about this which contribute to rates of cannabis use and cannabis use disorder for Black American adults is blunt use.”

“Blunts” are described as a hollowed-out cigar filled with Cannabis and tobacco and are more commonly reported among Black American cannabis users than cannabis users from other racial groups, Garey elaborated.

“This is concerning, because blunt use exposes individuals to more carcinogens and toxins than say if they were just using cannabis straight,” Garey said. “Blunt use is related to greater risk for cannabis use disorder. So, there are some unique characteristics that warrant this intervention.”

“These false safety behaviors, such as cannabis use, are used to help someone cope with anxiety or depression,” Garey said. “But, they can actually extend feelings of anxiety and make them more intense when they arise. They are actions taken to prevent, escape from or reduce the severity of a perceived threat. The behaviors are used to mitigate and cope with different life stressors which are relevant to the Black community, such race-related stress and burden, but may be more harmful in the long-term.”

If someone reports they’re particularly stressed, and they are thinking about using more than they were planning to use, then the mobile intervention can provide real-time intervention materials to help them to meet and maintain their goals, Garey explained. In this way, the app will help support and eliminate cannabis use and other unhelpful false safety behaviors and promote healthy coping skills to manage stress.

One of the aspects of this research initiative which Garey specifically looks forward to is collaboration with the Houston community.

“We’re really excited to work with the community that we are trying to assist—working with the CRAB (Community Research Advisory Board) and getting feedback on our materials,” Garey said. “We’ll also be working and collaborating with Legacy health clinic to help recruit folks to better refine and improve the app.”

Garey believes this intervention will be meaningful for the community because it addresses false safety behaviors and supports people who desire to change the level of their cannabis use.

“There’s a real need for this type of specialized intervention,” Garey said. “We are addressing potential false safety behaviors that are relevant to Black American adults broadly. It really has potential to support people in making changes to their cannabis use which subsequently can help improve physical and mental health outcomes.”

Photo by Kindel Media for Pexels 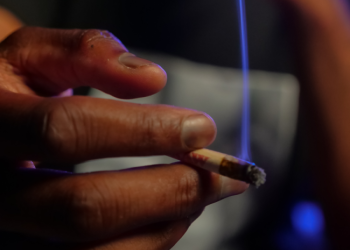